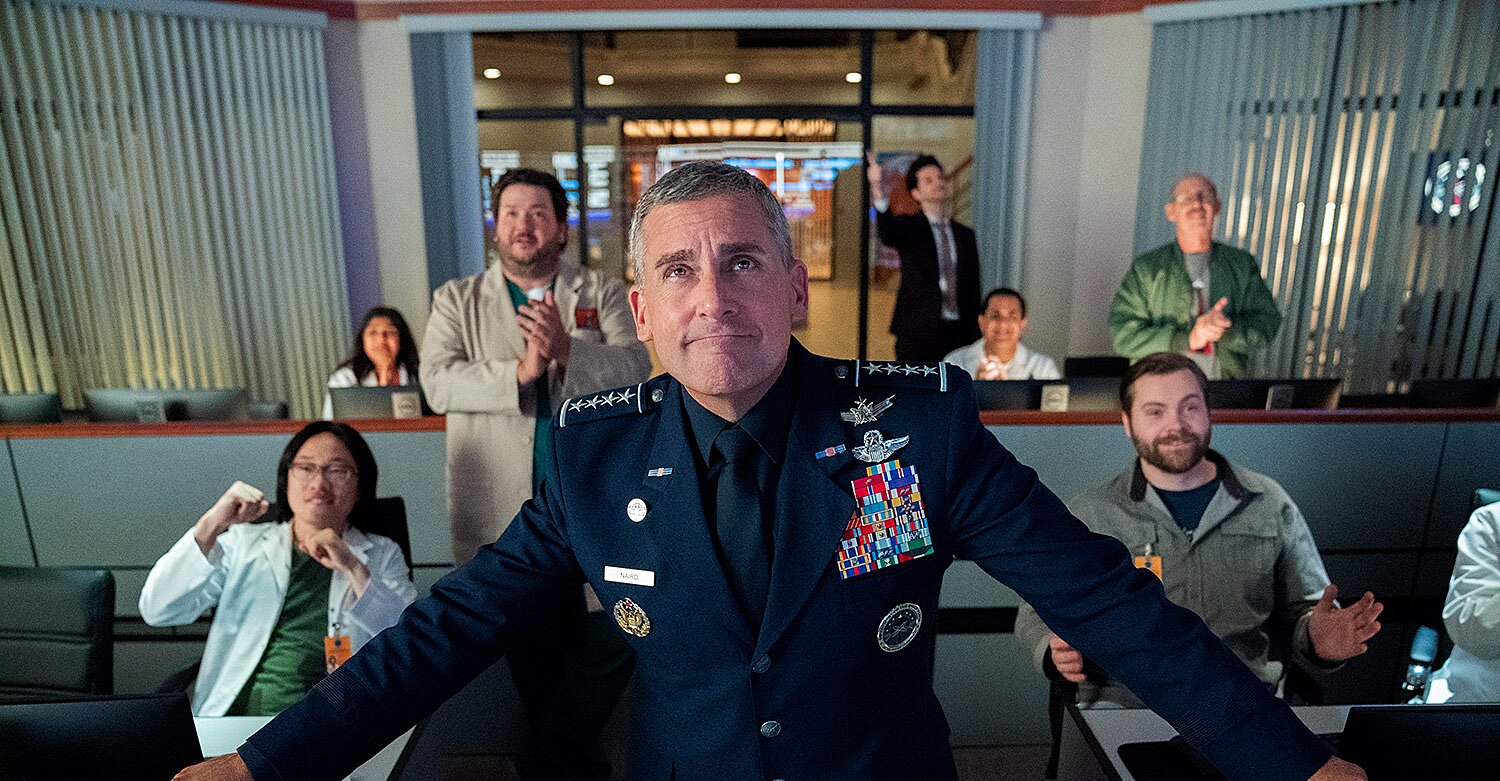 The former ‘Office’ mates take you inside their new satirical comedy, debuting May 29 on Netflix

When Donald Trump declared in 2018 that the American military would boldly go into the final frontier, Steve Carell was quick to enlist. Not in Space Force. In Space Force. The Oscar- and Emmy-nominated actor anchors the satirical comedy as Mark R. Naird, a staunch, starched Air Force general who is saddled with running the nascent military branch from a mostly top secret Colorado base. Naird’s orders? Boots on the moon by 2024! (The show’s unnamed president tweeted “boobs on the moon,” but the secretary of defense is pretty sure he meant “boots.”)

Carell heeded the comedic call to duty after receiving a simple two-word pitch from Netflix. “They had no premise; it was just the name,” says Carell. “The notion of this new military entity was funny to me… It seemed like something that had never been explored before. Obviously, because it hadn’t existed. Because we’d be developing our show as the actual Space Force was being created, there were no parameters, there were no rules. It was a blank sheet of paper, and that was intriguing.”

To help him fill that paper with high-in-the-sky ideas, Carell drafted an old workplace buddy, The Office showrunner Greg Daniels. The pair were much more interested in blasting into uncharted territory than strolling through familiar ones. “In a way, it’s sort of the antithesis of what we did on The Office, because there was a roadmap to that show,” says Carell, who returned to TV last year with the Apple TV+ drama The Morning Show. “There were characters or character-like types in place, and a structure as to the way the show is shot. But this didn’t have any of those aspects. From day one when Greg and I first met to discuss it, we had to decide what the show would feel tonally and where would the comedy lie, and how much of it would be serious or more heartfelt or more genuine, more human.”

Turns out, Daniels had long been interested in crafting a military comedy, though his dream involved an aircraft carrier. But as he explains: “This is better. There’s such wonderful cultural memories from landing on the moon, and there’s a feeling of ‘We really had our act together back then.’ Everybody around the world was so excited for Neil Armstrong and one giant step for mankind. Now there’s so much more nationalism and everybody’s trying to get a piece of the moon. So it feels like a very good way to talk about stuff in the world.” And in the show’s world, he notes, “now that it’s becoming less about scientists and astronauts, and more military, what’s funny is picturing the skill set of somebody who wasn’t expecting to be put in charge of something this technical.”

The four-star loyalist who doesn’t quite trust science will need every atom of it for this muscle-flexing, militarized space race. “He’s a creature of habit and a creature of discipline, and he’s been in the military most of his life,” says Carell of Naird. “That’s what he knows, that’s what he abides by — and it could be considered a weakness as well.” General Naird finds assistance and resistance from sensitive astrophysicist Chan (Jimmy O. Yang), craven media consultant F. Tony (Ben Schwartz), promising pilot Angela (Tawny Newsome), ornery Air Force chief of staff Kick Grabaston (Noah Emmerich), and most considerably, Space Force’s erudite head scientist Dr. Mallory (John Malkovich). (“He’s the pure science geek who really hates any government or political interference into his field,” says Malkovich of Mallory.) Naird’s military-grade headache intensifies as he tries to manage relationships with: his probable-Russian-spy-dating daughter, Erin (Diana Silvers); his declining dad, Fred (Fred Willard); and his upbeat, by-his-side wife, Maggie (Lisa Kudrow), who is now embarking on a journey of self-discovery. (“Is she a badass or is she not?” is one hint that Kudrow drops about Maggie.) Brace also for moved-up launches, a psychological breakdown in a simulated lunar habitat, a spirited rendition of “Kokomo,” Chinese-government competitive malfeasance, and a mission-critical chimpanzee.

We’ll get back to the chimp in a bit, but did you notice the stellar cast assembled here? (And we didn’t even mention Jane Lynch, Patrick Warburton, Diedrich Bader, Dan Bakkedahl, Jessica St. Clair, and Don Lake, among others.) Notes Daniels: “For the Joint Chiefs, we were like, ‘They have to be of the same caliber that Steve is. The Joint Chiefs is the meeting of all of the heads of all the service branches. They’re all very impressive people. So if we’re going to cast comic people, they’ve got to to be hefty comedy people.'” The cast wasn’t limited strictly to comedic killers, though. “Some people aren’t necessarily known for doing a lot of comedy, like Noah Emmerich and John Malkovich, and they’re hilarious,” reports Carell. “John Malkovich just makes me laugh. I feel like I always have to say his full name. John Malkovich. It’s the respectful thing to do.”

Malkovich — whose Mallory frustratedly matches wits with Naird — gravitated to the duo’s gut-versus-science polarity. “The conflict and humor of it strikes a good balance between those two experiences of the world,” he says. “The lesson is: All of us may overestimate our strengths and the validity of our points of view.” Kudrow signed on to the project with the most unique point of view. “I really did not know the president said, ‘Let’s have a Space Force,'” she says. “I mean, I just can’t keep up, so I missed that one. It was just, ‘We’re doing the show, why don’t you do it?’ And I was like, ‘Yeah! Why wouldn’t I? It’s Greg and Steve!’ Then I saw all the other people in it and went, ‘Yeah, okay!’ But sorry, dumbass here didn’t know there was actually a Space Force. And it’s so embarrassing because when I saw the last State of the Union and [Trump] mentioned Space Force, I went, ‘Oh! It’s a real thing!’ The whole time we were shooting, it didn’t come up.”

That admission might please Carell and Daniels, who insist that they didn’t set out to skewer Trump or the armed services. (Influences included Dr. Strangelove and The Right Stuff.) “Part of our goal was to make somebody in the military enjoy the show and not feel like some snotty Hollywood person was making fun of them,” shares Daniels. The 10-episode season was filmed well before the coronavirus forced a Hollywood shutdown (and also before the real Space Force unveiled its camouflage uniforms, similar to the ones in the show played for laughs), and Daniels hopes that it still feels, well, hopeful in these pandemic times. “We’re hearkening back to the national excitement over the moon,” he says, “and trying to do that justice as a comedy.”

The writers’ vision was also shaped by research, which included multiple trips to Space X. “The interesting thing is that the more research we did — and we did a lot of research about it — I think it isn’t crazy for the United States to want to have a Space Force,” says Daniels. “If there’s anything that’s a shame, it’s not that we’re insisting on having a Space Force, it’s that everybody in the world is rushing to do this in a competitive way [rather] than a cooperative way. And if we didn’t have one, according to all of our research, we would still need one because of other countries doing the same thing. As we worked on the show more, it kind of broadened a bit in terms of what we were writing about.” And although Space Force winks at Nancy Pelosi, Alexandria Ocasio-Cortez, Anthony Scaramucci, the First Lady and a tweeting, Russia-friendly president, “it’s surprisingly patriotic,” says Carell. “There are things that are lifted from the current social and political world, but it’s done with a light touch. It doesn’t really lean too hard either way. It’s an equal-opportunity show.”

Down to the space-bound simian, who may leave those NASA chimps in the dust when tasked with doing something that will truly test his manual dexterity and mental acuity. Says Carell with pride or curiosity: “I don’t know if the term chimpstronaut has ever been coined before.” In any case, when Space Force launches on May 29, prepare to enter zero gravity with zero gravity.

Billions recap: Axe’s new foe beats him at his own game

Supergirl recap: The fantabulous emancipation of one Lena Luthor

The Good Fight recap: The gang goes wild after being satirized by a play

The Challenge: Total Madness recap: Relationships implode on and off the show

American Idol recap: The Top 7 serenade the important ladies in their lives

The Voice recap: Did your favorite make the finals?

The Voice recap: The Top 9 sing for their biggest fans

The Real Housewives of New York City recap: Show me the money

The Real Housewives of Beverly Hills recap: Three’s a crowd

Listen to Your Heart recap: What happens in Vegas goes on TV