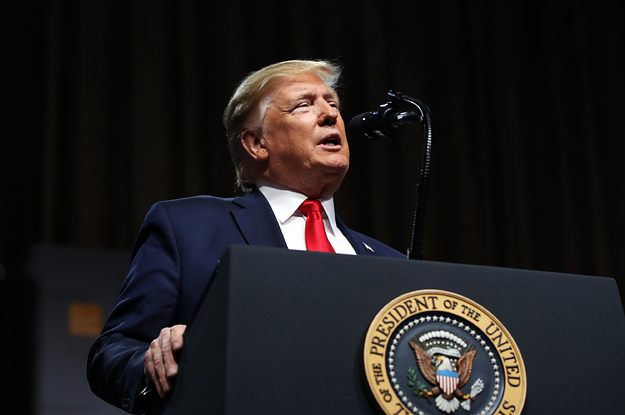 Focusing solely on Ukraine, they say, “risks portraying that Congress is more concerned about Joe Biden’s son than about the children who are being detained and separated from their parents.”

WASHINGTON — The House of Representatives is set to hold its first public hearings as part of their impeachment inquiry into President Donald Trump Wednesday, where Intelligence Committee members will question witnesses about the still-unfolding Ukraine saga at the heart of the investigation.
Since officially launching the inquiry in September, Democrats have been solely focused on Ukraine, setting aside earlier investigations related to former special counsel Robert Mueller’s report and dismissing other allegations against Trump — including sexual assault and other misconduct.
But as the investigation has barreled forward, progressive activists and left-leaning members of Congress have argued that, when the inquiry concludes and it comes time to write articles of impeachment, the resolution should be more expansive than just Ukraine and written to include earlier investigations, violations of the emoluments clause, and the president’s history of racism.
In a Dear Colleague letter released Tuesday morning, Intelligence Chair Adam Schiff outlined the three questions the committee will aim to answer in the public hearings:

But progressive activists say that line of questioning is too narrow, and they’re pushing for Democrats to write more expansive articles of impeachment once the investigation has concluded — and they’ve even written a sample resolution they hope the House will adopt.
“Far too many of the people who are supposed to represent us have responded to Trump with fear and caution instead of bravery, with complicity and compromise instead of condemnation,” a statement from progressive groups By the People, CREDO Action, and Free Speech For People reads. “Their failure to lead with moral courage has emboldened Trump to commit more abuses of power and normalized his dangerous agenda.”
Ten other progressive groups, including the Women’s March, have signed on to the statement and the resolution drafted by Ron Fien, the Legal Director of Free Speech For People, which includes seven proposed articles of impeachment.
Among those articles is one focused specifically on “abuse of office to promote discrimination, hostility, and unlawful violence,” which says that the president has “repeatedly engaged in conduct violating the constitutional rights of individuals, misused agencies of the executive branch for improper purposes unrelated to any lawful function of his office, or misused his official position to promote discrimination, hostility, or unlawful violence on the basis of race, color, religion, or national origin.”
“We think it’s important to include that within the scope of the impeachment conversation so that it’s not all about this national security and bribery issue,” Fien said in a recent interview with BuzzFeed News. “It also risks portraying that Congress is more concerned about Joe Biden’s son than about the children who are being detained and separated from their parents and in some cases given away to adoptive families after their parents have just been deported at the border.”
Some members of Congress have called for the inclusion of similar articles in recent weeks.
“The words ‘racist abuse of power’ should be part of the articles of impeachment. Not including this type of abuse based on racism will be unjust to the children caged at the border & all the communities who have faced violence b/c of his actions,” Rep. Rashida Tlaib tweeted last week, responding to a story about Trump’s decision to proclaim November “National American History and Founders Month” instead of Native American Heritage Month.
And Rep. Al Green, the first sitting member of the House to support impeaching Trump, made a similar argument, telling BuzzFeed News in September that he wants to see “at least one article of impeachment concerning the president’s bigotry infused into policy that is harming our society.”
While House Speaker Nancy Pelosi has said no conclusions have been made regarding what will be included in the articles, she dismissed the inclusion of anything that might seem ideological, telling reporters at a press conference that if voters or lawmakers have concerns like gun violence prevention, immigration and trans rights, climate change, or abortion rights, they should “save that for the election.”
But progressive activists, including some progressive members of Congress, believe it’s important to paint a comprehensive picture of the president’s misconduct.
“The president has a repeated pattern, not just a one off incident, but of using his office both through his actions and his rhetoric, which has consequences when you’re the president, to misuse his office and the executive branch,” Fien said. “That crosses a line, and it’s important to draw that line in the impeachment process.”
The other articles included in Fien’s resolution address abuse of power to target political adversaries, critics, and the press; corruption of electoral processes; corruption and self-enrichment; obstruction of the administration of justice and Congressional inquiries; and misuse of armed forces and abuse of emergency powers.