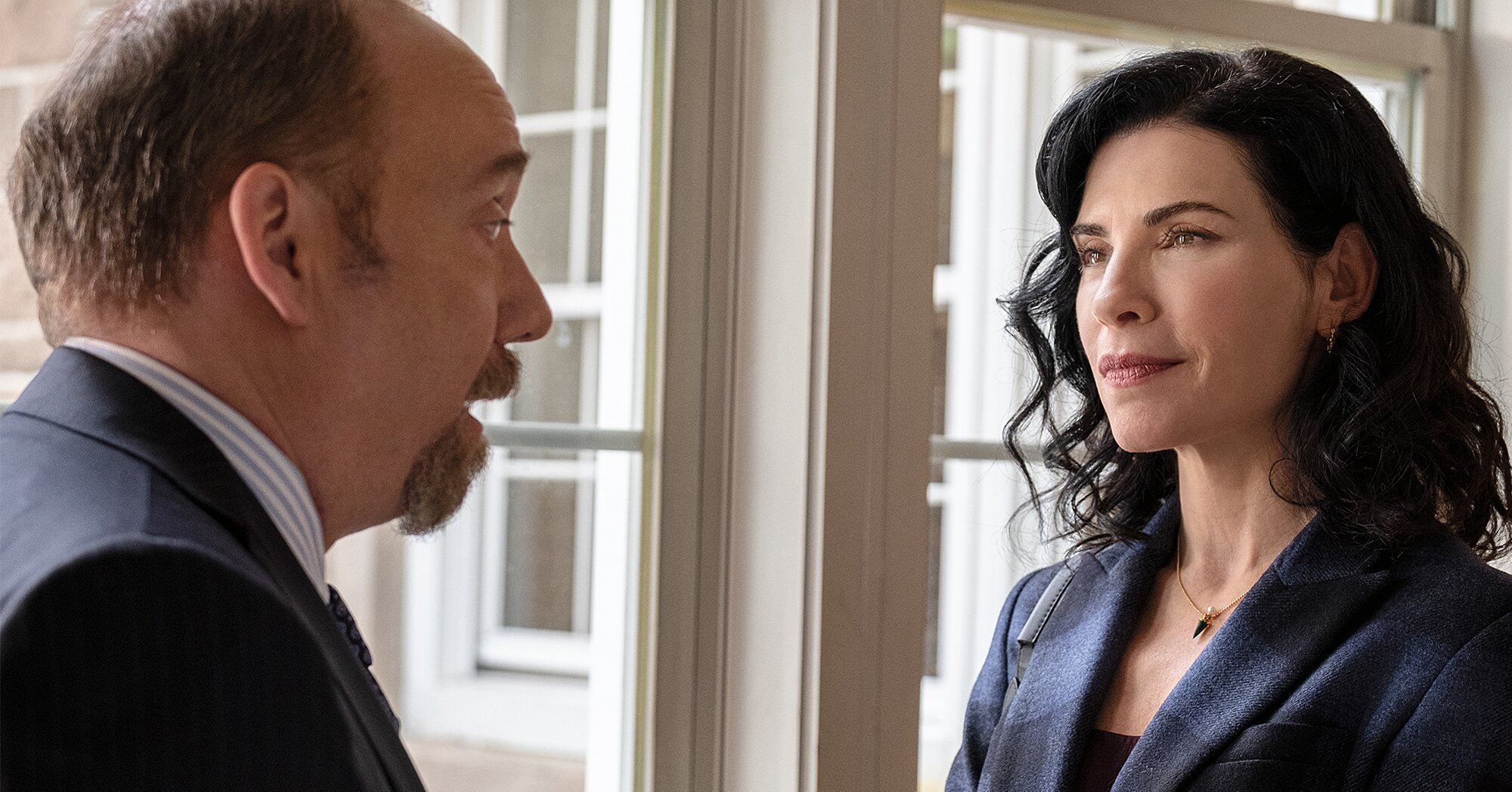 After years of pursuing Julianna Margulies, the Billions creators were able to land the Good Wife star for a juicy role in season 5.

After years of pursuing Julianna Margulies for their hit Showtime series, creators David Koppelman and David Levien were able to land the Good Wife star for a juicy role in season 5. “Julianna Margulies is just one of the smartest actresses working in film and television,” Koppelman tells EW. “The two of us have admired her work for a long time. The way in which she’s able to make any kind of dialogue sound like her own, how she’s able to create a character from the ground up that seamlessly fits into the world of a show but is it’s own distinct thing. She’s a marvel, one of the greats, and a legend for a reason. We wanted to sit and talk to her because the other times she came in, the timing didn’t land right and we didn’t have an exact part, but we knew we would write something for her at some point in the run and wanted to get to know her a little bit so that we could tailor some of it.”

Added Levien: “Beyond her talent and how much we were excited to work with her, when we sat with her, we just loved her, she was so cool to hang out with, and we were like, ‘We’ve got to have her on the show just so that we can spend time with her.'”
The showrunners don’t want to spoil too much about Margulies’ character, Catherine Brant, an Ivy League sociology professor and best-selling author, revealing that “her story and Chuck’s (Paul Giamatti) intertwine a bit.” Further shares Koppelman, “She’s written a bestselling book in the area of sex and sociology, she’s sex-positive, she has a clear point of view on where feminism sits and where she sits in modern feminism, and she’s a brilliant person. Sitting with Julianna just let us know that she would be able to sink her teeth into this kind of character. It’s not that she and the character are similar, it’s that we felt like she would understand this character’s journey.”

Ahead of the three-time Emmy winner’s return to TV, EW chatted pre-quarantine with Margulies about feeling at home on Billions, realizing how exhausting leading The Good Wife was, and being grateful for not having to understand or use the show’s financial jargon. Above, watch an exclusive clip of Margulies making her Billions debut.
ENTERTAINMENT WEEKLY: David and Brian have long been after you for Billions, so what made this opportunity the right one?

JULIANNA MARGULIES: I’d always been a fan of the show, and Brian and David had brought me into their office a couple of years ago right after The Good Wife ended and said, “We’re dying to get you on the show.” But I had a job and it didn’t work out, and then the next year they tried but then I was going to do Hot Zone. Then, finally this year they brought me in and said, “We have a great character for you,” and they sat me down and explained who this woman was, and I loved it, and I happened to be free. I said, “Great, I can give you like four episodes, and let’s see where we go from there.” So it was one of those where just timing worked out and the character was great. I play a sociology professor at Yale who has written this one book that was a  New York Times No. 1 bestseller a few months in a row and changed peoples’ lives, so she’s a little bit of a hotshot in her field. It was a fun character to dive into. And all of my scenes were with Paul Giamatti, someone I’ve been dying to work with since I saw him in Sideways, so I was thrilled.

What’s the experience been like so far?
I always felt so lucky that I’m an actor in New York, because, first of all, I know half of the crew, they were all on my set on The Good Wife. There are so many people that I know and actors who come up to me and I’m like, ‘Oh my god!’ Ben Shenkman, who I did Canterbury’s Law with, Steve Kunken, who I was on Broadway with. I walk into the read-throughs and I know so many of the people, so it doesn’t feel foreign to me, it feels like going home. Yet, I don’t have to carry the whole show. It’s been really easy. Paul Giamatti is the consummate actor. He’s actually an actor who works very much like I do, in that I love to run lines until we know them inside and out. He loves doing that, so there’s a real kismet going on set that’s just easy and gentle and it doesn’t feel like I’m breaking my back. I’m just having a really good time.

After seven seasons as the face of The Good Wife and having so much on your shoulders, is it a nice break to just pop in and have some fun for a few episodes?

Oh my god, it really is. It’s like a staycation. [Laughs] When I did The Good Wife, I really didn’t realize how exhausted I was, because I didn’t have the time or the luxury of time to allow myself that feeling until it ended — and then I just collapsed. Because the first two seasons we did 23 episodes per year and then the next five seasons we did 22 episodes, so having been the star of a show for 156 episodes, plus having a little baby at the time, so when I’d get home I never just relaxed, I wanted to be a mom and a wife, and all of that pressure that I put on myself. Now, going in, I don’t know how I did it. Being able to say, “Oh, great, I work Tuesday and Wednesday and maybe in one scene on Friday,” I can plan my kid’s dentist appointment, I can go out to dinner with my friends — I have a life. And I never knew that you could actually have a life and work, that just wasn’t part of my dialogue for seven years. So it feels really good to always feel fresh to start the day, not just feel exhausted when I begin a fourteen-hour day. It’s a very different beast and I’m really enjoying myself.

Brian and David were a bit secretive about your character when I chatted with them, but, in addition to her job and accomplishments, what can you tell me about Catherine Brant?
I don’t want to give too much away, but I will tell you that she’s sort of the conduit for Chuck Rhoades (Giamatti) finding another side of himself. And I think it’s because she comes from a place of complete non-judgment, nothing fazes her; she’s been studying his kind of behavior all of her life, she teaches it at school, and she’s a scholar. So she isn’t deterred by his behavior, which he finds that quite enlightening. So I think you’re going to be able to see a different side of Chuck Rhoades as he’s discovering himself outside of what he’s always thought he needed.

What’s it been like diving into the scripts for Billions? The dialogue is really unlike anything else on TV, between the speed, financial jargon, and pop culture references.
Well, I can tell you that I’m really grateful that I don’t have to do any of the financial dialogue. [Laughs] I think that’s probably just as hard as medical dialogue or lawyer dialogue. I watch the show and sometimes I have to see it again because I don’t understand all of the terminology in the finance world. But, jumping in as a different character from the rest of the group, they’re very conscious of me not speaking like everyone else, in that same sort of quipped, quick tone. There’s definitely some of that in there, and you can’t help but sort of jump on that wagon with everyone else, because that’s also sort of the charm of the show. But my character stands a little bit aside from that kind of dialogue because it’s not her world. What’s really fun, and I’m so grateful that they respect the acting and writing process enough to make every single person, no matter how big or small their part is, we all go in for a table read before the episode starts. And they make it very easy, they serve us lunch, and we sit down for an hour and we read it out loud, and that is really rare. We actually used to do it on ER, but only with the main characters. This is with every single actor, and what happens is that you get enveloped into this story, because it’s one thing to read a script, it’s another thing to hear it read by the actors who play those parts. So there’s a real understanding of what you’re getting into before you start filming, and that is few and far between in television. I think it helps the writers, it helps the actors, and it helps you have this understanding of what the story is they’re telling from everyone’s point of view instead of just your own.

The 100 season premiere recap: ‘From the Ashes’ … can they rise?

The Good Fight recap: The gang learns about the OLC

Killing Eve recap: What the fork happened to Niko

The Voice season finale recap: The Season 18 winner is…

The Voice recap: The final five sing for the win

The Voice recap: Did your favorite make the finals?

The Real Housewives of New York City recap: It was a ceasefire