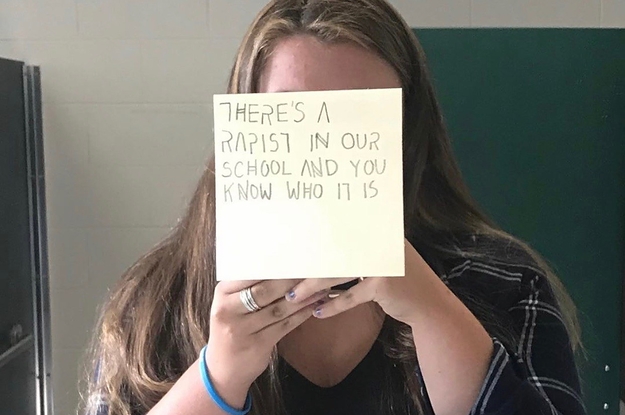 “I honestly feel very ashamed that my school took this action,” the student said.

“There’s a rapist in our school and you know who it is.”
Those words, handwritten on a sticky note and posted in a high school bathroom, have led to a Maine teenager getting suspended — not the alleged rapist, but the 15-year-old girl who wrote the note.
Aela Mansmann, a sophomore, was suspended from Cape Elizabeth High School on Friday for “bullying” because she posted the note, which did not name anyone as an accused rapist.
“I honestly feel very ashamed that my school took this action,” Aela told BuzzFeed News.

It all started in September when Aela said she’d gotten “pretty fed up” with the amount of sexual assault and harassment her classmates were facing, apparently without consequences for the perpetrators.
So she and a friend put up that sticky note. Soon after, many more students posted similar notes in the bathroom speaking about their stories of sexual violence at the hands of classmates.
Aela’s note was not about one singular, specific rapist, she said.
“It was really addressing the general culture of our school, and keeping in mind several specific cases,” she said. “But there are so many it’s hard to pinpoint just one and advocate for just one of them.”
Later that day, school administrators called her into the office and launched an investigation into the sticky notes, she said.
“For three weeks, myself and other students were brought in for interviews and interrogation,” Aela said. “They promised all of us whoever put notes up would not be in trouble.”
Aela was interviewed three times over several weeks, and she never once heard of any of the students accused of sexual misconduct facing consequences.
But one of the accused apparently did go to school administrators — to report being bullied, Aela said.
“That kinda confuses me, right? Because this person wasn’t identified in the sticky notes,” she said. “In fact, there’s more than one person that was being referred to. Yet this person self-identified feeling targeted, so the school took steps to suspend me versus further investigating that self-identification.”
On Friday, the Portland Press Herald published an article in which Aela spoke about the issues at her school.

Two hours later, she was called into another meeting with administrators and informed she was being suspended for violating the school’s anti-bullying policy.
In addition to herself, two other students were suspended as part of the investigation into the sticky notes, Aela said.
In an interview with News Center Maine, Superintendent Donna Wolfrom said the notes caused “a lot of confusion” and “had some adverse effects on other students.”
“I think there’s a way to do it, a proper way to do it, and if they go through the proper channels, I think that’s perfectly fine,” Wolfrom said of the sexual misconduct allegations.
In a letter from the superintendent’s office, a spokesperson said the school “has never disciplined a student for advocating for their peers or their views on cultural, social, and political matters.”
“It is important to understand, however, that when a student’s speech bullies another student, we are required by law and by school board policy to investigate and take prompt action, even if that same student has also spoken out on a matter of public concern,” the letter added.

NEW: Mother of girl who posted the sticky notes says she has been suspended for bullying. The school says they have never disciplined a student for advocating for their peers, but says it’s important when a student’s speech bullies another they are required to take action

Policy guidelines on the school’s website do not provide a precise definition of bullying, instead describing it in all-encompassing terms. The policy also does not intend to prohibit students from “expressing their ideas, including religious, political and philosophical views that may offend the sensibilities of others.”
School officials did not immediately respond to a request for comment from BuzzFeed News.

On Monday, about 50 students, including some from neighboring schools, held a walkout in protest.
In addition to advocating for survivors of sexual assault, Aela said the students were also protesting for their First Amendment rights, which they feel were violated when they were punished for speaking out.
“The whole goal was to protest the suspensions and show everyone’s support for the survivors that walk our halls every day,” Aela said.
At the walkout, the students read off a list of demands, which included expunging whistleblowers’ records and overhauling the sexual assault reporting process.

Aela is appealing the three-day suspension with the help of her parents. The family is no stranger to this kind of activism — her mom is the cofounder of a sexual assault prevention organization called SafeBAE, which Aela also works with.
She is still allowed in school pending the result of her Wednesday hearing, she said. But regardless of the outcome, she said she’s holding strong, knowing she did the right thing.
“I’m hoping it does get expunged, but we’ll see,” she said. “There’s nothing else I can do at that point.”